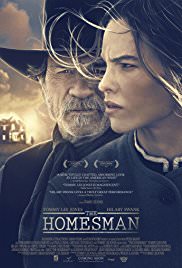 "You are not socially acceptable."

THE HOMESMAN opens with a very awkward marriage proposal on the part of a woman living alone in Nebraska Territory to a man who can barely stay awake during their dinner. Mary Bee Cuddy (Hillary Swank) is a farmer in an unforgiving part of the country, eking out a fair living but unable to find anyone willing to marry her, which is beginning to cause her great distress.

Meanwhile, as winter picks up, three wives of nearby homesteaders have all gone insane. Unable to cure the women, the church of the nearest town elect Mary Bee to take the three back east across the Mississippi, where they'll be sent back to their families. Before the journey can even begin, Mary Bee runs across a man calling himself George Briggs (Tommy Lee Jones), left to die with a noose around his neck and an unsteady horse beneath him. Agreeing to help Mary Bee transport the three women back east in exchange for his life, the five of them set out into wilderness unsure of what they'll come up against.

THE HOMESMAN, which marks Tommy Lee Jones' third film in the director's chair, is (for my money) one of the best Westerns to be made in recent years. Though Jones himself has made the claim that the film has little in common with a traditional Western aside from time and location -- and he's right -- it still fits neatly within the boundaries of a revisionist Western, with its goal of treating familiar imagery with a healthy dose of realism.

The film shines a light on the treatment and overbearing expectations of women on the frontier, and does not shy away from depicting the conditions which first impelled these three women towards insanity. Even Mary Bee, who is the overseer of the journey, finds it difficult escape the pressures of being a single woman. Though only thirty-one years old, she perceives herself as someone who is missing the train, so to speak, to becoming the wife she believes she *must* be and achieving her womanhood in the process. Although she is the one driving the wagon, she and the other three women are all on the same journey, suffering the same affliction at varying intensities. (This also makes the title of the film tragically ironic in context.)

THE HOMESMAN is a very cynical film, and very aware that the conditions that plague its main cast are not going to go away for decades. Its very premise illustrates this, kicked off by a group of men who would rather send their wives away forever than to deal with their suffering. However, it still focuses on a facet of the frontier that very rarely takes center stage in the genre. It's beautifully shot, well-written, and the cast is all around solid. Tommy Lee Jones has created a Western that meshes the aesthetics of the classics with the themes of modern cinema. It's not very optimistic, but then again the West rarely was.