Hope everyone is doing well! (In this Age of Fire and COVID.)

Since my last post, there have been some new developments. Chief among them is that WHAT WAS YOUR NAME DOWNRIVER? has gotten a snazzy new cover! The old one was serviceable for what I was trying to accomplish at the time, which was to just get my writing projects out there no matter what. Cover art was always a barrier and I decided if it's between not publishing a story or making something for the cover, then I should go for the latter.

But! Circumstances allowed for the creation of a new cover that fit the tone of the story and I'm grateful that opportunity came along. So here is the new cover for the first story in The Shattered Frontier series: 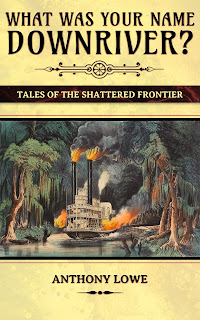 Love the way it turned out and I couldn't be more happy about it.

I did a free promotion for the book recently and I got some very kind reviews/comments. I'm ecstatic that folks seem to be enjoying it so far. It's not a particularly long book, but it's something I've been working on awhile. Getting all the worldbuilding locked in, writing/rewriting after work, editing, formatting for both ebook and paperback. It's been a journey!

As always, if you happened to check it out, please consider leaving a review. I can't tell you how crucial reviews are for indie authors. They help expand the book's audience, take the edge off of any prospective sequel plans, and, dang it, they're a great form of encouragement besides.

As for the future, I think I've mentioned a number of projects since moving back to the States, but there are three main projects on the docket that I hope to see completed within a reasonable amount of time. In no particular order:

1. Lore of the Reluctant (Book 3): This Machine Kills Dragons - When I first started writing these stories, I made myself a promise that I'd see a trilogy through to completion. I've started writing the third book, but it might get knocked down in priority if WHAT WAS YOUR NAME DOWNRIVER? maintains the traction it has right now. It'll close out what I'm tentatively calling "The Long Road to Vellonae Trilogy" and leave the door open for more stories if there's some demand for more.

2. The Shattered Frontier (Book 2) - The adventures of Evaline and Trivan were always supposed to culminate in much larger novel. Book 1 shows how their friendship calcified, Book 2 would see them on a rather long journey of some personal import to Evaline. If Book 1 was a shorter adventure, Book 2 would be something closer to FELLOWSHIP OF THE RING, somewhere in that ballpark. It would also firmly establish a larger story arc that would carry on through additional novels.

I've got a decent chunk of Book 2 already done. It was originally supposed to be Book 1, but I doubled back to write a smaller story that would act as a more effective introduction to the setting and characters. A nice vertical slice!

EDIT (Sept. 28): This plan will be shifting around a little bit. I think it's all but a certainty that my next book will be TSF Book 2, but I've changed the plan as far as what the story will involve. It will be longer than WWYND, but of a similar scope. I'd like to do one more of a similar size to round out a trilogy before jumping into the juggernaut that'll be the fourth book.

I think spending more time with Evaline and Trivan, in addition to getting more of the setting on the page and dropping more hints about the larger arc, will give me some much needed runway for Book 4.

Book 2 is in the works right now. It's rough, but there are 10k+ words locked in so far. Really liking where it's gonna go!

3. Realm of Avarill Online - A while back I wrote a short story called "In the Land of Dead Dragons," which I really enjoyed writing. So much, in fact, that I started work on a follow-up novella that's maybe 60% finished right now. It's been a good excuse to revisit all of my old MMORPG experiences from games like Nexus, EverQuest, World of Warcraft, Guild Wars 2, and Lord of the Rings Online. Corpse runs and player-killing and griefing like crazy. It's irreverent, the protagonists are terrible, terrible people, but I'm hoping litRPG fans will get a kick out of it!

And, of course, I always seem to be writing short stories, so some of those might pop up on Amazon soon.

So think I'm finally getting the hang of Twitter! After playing around with it for a couple months, I've actually come to really enjoy it. Feel free to find me at @AntonymLowe and check out my Star Wars geek-outs, Japan pictures, writing and personal updates, and even more Star Wars geek-outs!

In a rather sad update, my cat of 18 years passed away a couple weeks ago. It was a devastating blow to the family. It's always sad to lose a pet, but Hershey has been around for more than half my life (and three presidents!) and there's still the expectation at the back of my mind that he'll be there when turn around since it feels like he's always been there.

He was a super-affectionate cat and made it a point to involve himself in everything the family did, at all times. Even though I'm thankful for every day we had with him for nearly two decades, it still doesn't seem like enough. 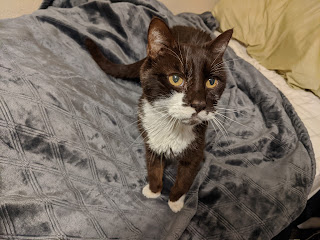 Hate to end the post on a sad note, so instead I'll end with a link to what's currently my favorite YouTube channel. David Lynch of TWIN PEAKS and ERASERHEAD fame spending a few minutes of each morning everyday to provide a weather report in LA and wish everyone a pleasant day. Not a bad idea to make positivity a part of a daily routine!