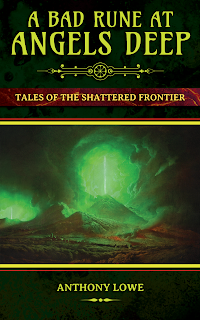 Here it is! The second book in THE SHATTERED FRONTIER series!
I can't promise I'll be able to consistently deliver two books a year like this, but quarantine has been a heck of a thing. Let's jump right into the synopsis:

THE CONTINUING TALES OF SIX-GUNS AND SORCERY!
Runes: a form of deployable magick that caused untold devastation during the war. With the stroke of a pen, entire cities were demolished, entire armies decimated--and now one such rune may have come south to Ariasun County.
Acting on scant clues left behind by the vicious lynching of a smuggler, Evaline Cartwright and Trivan Esterhazy head north to track the rune’s passage through the county. All in the hope of destroying the rune--or its possessor--before it can be used for catastrophic ends.

RELEASE DATE: February 23rd, 2020
This has been an odd writing process for me. Legitimately, I haven't been able to write this much in many, many years. A big part of it, I think, was quarantine and just wanting something to engage with. Another part was most of the footwork already being done. Seems strange that WHAT WAS YOUR NAME DOWNRIVER? took years to finish, while A BAD RUNE AT ANGELS DEEP only took three months... and is almost twice as long.  But a lot of that time spent on Book I was planning the big steps and small steps alike, and with all that locked into place I could just get up and go.
It's also very likely that my mind needed a distraction. Losing my old cat took a lot out of me. It's been just shy of five months since he died, but it still feels raw. Taking some time and writing a novel definitely took the edge off.
So, it's up for preorder now! I'll probably still take some time to make a few last minute corrections before I walk away. I'm also in the process of getting the paperback version ready. The preorder page might not be up until the second week of February, but it'll definitely launch concurrently with the Kindle version.
Other bits of news:
r/Fantasy RAF Book Club
WHAT WAS YOUR NAME DOWNRIVER? was selected to be a part of r/Fantasy's Resident Author Fantasy Book Club on Reddit! This was a great surprise and I'm very much looking forward to seeing what everyone has to say.
The book will be read through March, with a Q&A to be posted just before then, I think. If you want to join in, here's all the information. And I'll probably post all the relevant posts here as they drop.
To everyone who will be participating in the book club, I'll try to make the book free for a week beforehand.
Price Drop: The Shattered Frontier - Book I
Since Book II is right around the corner here, I'm lowering the price of WHAT WAS YOUR NAME DOWNRIVER to $2.99 as a means of lowering the barrier of entry to the series. This will likely be where it'll stay.
Lore of the Reluctant Paperbacks Temporarily Withdrawn
Now, I'm still fairly new to all this. I'm always learning, always fine-tuning. I started publishing the Lore of the Reluctant books several years ago to help myself get over the fear of putting my work out there. There was a sort of lackadaisical approach to publishing them that I'm still trying to correct, as a result. One of these was the formatting of the paperbacks of both THE OUTCASTS OF VAMPIRE FLATS and BLADES OF ELSINGR.
Basically, I'm going to spend a little more time fine-tuning the formatting for the paperbacks. Shouldn't take too long, but I didn't feel good about having them up for sale in the meantime.
The Kindle editions are a-okay, though I'll be going through and updating their "Works by" pages (I'm legit blanking on their formal names) to account for A BAD RUNE.
I think that's it! Be well, everyone!
Posted by Anthony L. at 2:55 AM